The congregation originally named “The German Evangelical Lutheran Church of Saint John” was founded in 1848 in the city of Philadelphia. June 1, 1997 marked the end of the congregation’s 149th year and the beginning of its 150th year anniversary. As part of the year long 150th celebration the congregation produced a series of historical “Glimpses of St. John Lutheran” which can be viewed below in pdf format.

The first major historical document (in English) was produced for the 75th anniversary celebration in 1923. It records in some detail the difficulties which plagued the congregation in its early years. The congregation was organized “under a cloud”–which is to say that it was born in the midst of controversy. The original members–immigrants from the Alsace–had severed their relationship with historic Zion Lutheran Church, which was affiliated with the Ministerium of Pennsylvania (now a part of the Evangelical Lutheran Church in America). They did this for doctrinal reasons. Doctrinal integrity has never been an easy or painless matter for Christians; yet, in faith these Lutheran Christians sought a congregation which would nurture their strong Confessional Lutheran convictions.

The little band apparently separated from Zion Church in 1840 but found it exceedingly difficult to get another congregation going. If you read between the lines in the histories describing these times you can feel the birth pains and agony out of which this congregation later came forth. 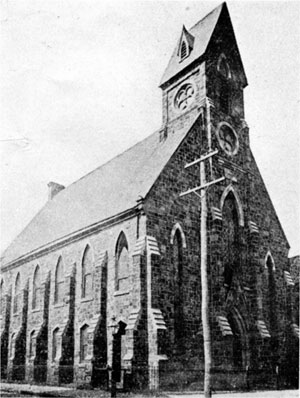 Past Pastors of St. John

In the midst of the painful struggle–and the apparent dead-end–came a hopeful sign: word of a doctrinally sound Synod which had just organized in the Midwest. On April 16, 1848, they discussed forming a congregation. On Ascension Day, June 1, 1848, a constitution was adopted and St. John was officially organized. Even so, the storms had not passed for the little congregation. The histories record that “Not a few times the prediction was made that St. John was at the brink of death.”The first resident pastor was Rev. Schaller, followed shortly after by Rev. Hoyer and Pastor Sommer, all who served short tenures. The next pastor was Rev. Keyl who had a productive ministry. Unfortunately he had to resign due to ill health. At this point the congregation called Pastor Schroeder, who served for 36 years. These were some of the “good old days” for St. John. Following this “high point” in its congregational life, the low ebb-tide began to threaten the congregation once again. Pastor Schroeder’s successor seems to have had trouble. Membership declined. Because of the location of the church the congregation became anxious about the future. Another pastor, Rev. Gesswein, was forced to resign in ill health, and many families were leaving for the suburbs. During World War I, the church building was actually for sale, but no buyers could be found.

The arrival of Rev. Edgar Behrens in 1927 for twenty years of service was another high point. It was a period of vitality particularly in mission work, at which Rev. Behrens, the Circuit Visitor, excelled. While pastor of St. John, Rev. Behrens and his congregation helped to start five mission congregations: the Church of the Redeemer, Mayfair (1928); Bethany Church, Trenton (1934); Martin Luther Chapel, Pennsauken (1935); Grace Church, Broomall (1943); and St. Luke’s, Castor Gardens (1945). While the struggle for St. John’s continued in its own neighborhood, its kingdom work was nevertheless richly blessed. The congregation was active and alive, but the struggles also persisted.

In 1948, during the pastorate of Rev. Leja, the congregation made the difficult decision to leave its old neighborhood and move closer to many of its members. The church building was sold in 1951 to the Board of Missions and Church Extension of the African Methodist-Episcopal Church. Since scarcity of steel and other building materials had delayed the construction of its new church in Springfield, worship was temporally conducted in the auditorium of the Springfield Central School. The new church was dedicated and Rev. Voss was installed on September 14, 1952.

The congregation experienced another burst of vitality in the 1950s. A kindergarten was established in 1954 and was well attended by neighborhood children until 1971 when Springfield established its own kindergarten classes. A nursery school was then operated three days a week until the mid-1970s. The 1960s saw congregational struggles return, however, and a slow but persistent decline in membership began, which lasted to the 1980s–at which time, the membership leveled off at about 100. Although small, the congregation’s commitment to its ministry remains strong and its finances are healthy. New younger families with children are replacing older members. Worship and educational programs are vital.

Today the congregation is recovering a spirit of renewal and recommitment as members rediscover the values and beliefs of its historic faith. Members of St. John continue to believe that the Gospel “candle” offers great hope and comfort in the darkness of our rapidly changing world. The saints of St. John have always forged ahead in the darkness, simply because they recognized that a faithful God was guiding them through it.